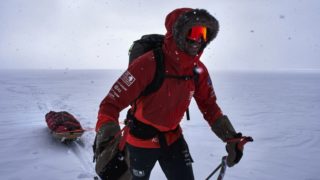 More O’Brady, Rudd Reverberations Colin O’Brady and Lou Rudd finished their Antarctica crossings last week, but the questions first raised in ExplorersWeb over whether their treks were truly “unassisted” and a full traverse continue to reverberate. Yesterday, The New York Times published an article from adventure writer David Roberts that put the controversy before a wider audience. The informal race between the pair had generated worldwide interest — interest that ignored whether these two treks merited such hoopla. The two men worked hard and did well, but their exploits were not as pioneering as most media believed. Solo to the South Pole Masatatsu Abe still feels pretty low. After his food drop, he is trudging for 11 hours per day and averaging 25km. On December 29, he turned 36. Abe celebrated by having his mechanical companion, Aibo, to sing him … Continue reading Antarctica 2018-2019: First? Traverse? Unassisted? The Controversy Continues