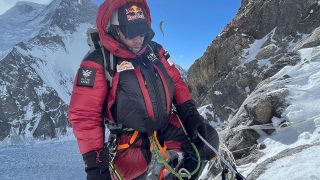 After a week at Base Camp waiting for the storm winds to drop, Nirmal Purja and company hurried to Camp 2 today, only to find tents and equipment destroyed and blown away. Likewise, Sergi Mingote seems to have lost his tent at Camp 1. Some expeditions may even be in jeopardy of ending prematurely. While Purja had expected some damage from the winds up to 120kph in recent days, he wasn’t expecting to find what he called a “wreckage site”. “We have lost everything,” he said. “Sleeping bags, mattresses, heated shoe insoles, summit gloves/mittens, summit base layers, paragliding equipment, cooking equipment, etc.” Why paragliding equipment, you may ask? It seems that Purja wants to paraglide from the summit of K2, if he gets there. Now back at Base Camp, he wrote dispiritedly, “ I am devastated to be breaking this … Continue reading K2: Chaos at Camp 2