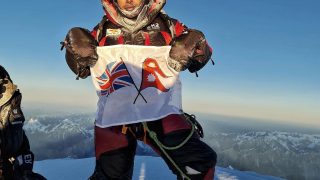 K2: Photos, Details, and Reactions to an Epic Climb

With all 10 summiters back in Base Camp recovering from what Nirmal Purja describes as “an overwhelming journey” and “one of the hardest pushes ever”, a few further details and some summit pics are slowly trickling out. Purja has been the first to hint at an exciting story behind the scenes: “The decision to hit the summit was a tough one…there had been close calls where team members nearly turned around due to the extreme cold,” he wrote. Purja added two pictures, including one on the summit, where he appears without an oxygen mask. No details yet about whether he or any of his partners went up without O2 or not.   News is also expected from Mingma G, whose factual, precise reports during the climb helped keep audiences “virtually” informed about this epic journey. Mingma originally launched the expedition … Continue reading K2: Photos, Details, and Reactions to an Epic Climb