(Newsdesk) Among the bad news from Everest south side, good news have reached Explorersweb that in spite of the quake epicenter hitting near Annapurna and Manaslu, climbers on those and nearby mountains appear to be safe.

A voice message from Don Bowie said they are all safe at Annapurna and have a very strong team that are ready to fly to Everest if needed. Chris Jensen Burke updated that one climber needed to be airlifted but the rest of the summit party is safe down from the recent summit push.

Messages from Makalu BC (Don Billy, Katrien de Pillecyn and Adrian Hayes) all report climbers there are safe.

Thomas Laemmle reported all clear from Cho Oyu and as far as we know since the departure of Horia and Hamor no climbers remain on Manaslu.

Italian Marco Confortola reported to his home team from Dhaulagiri they felt the quake and have decided to stay at BC and not to move up. They don’t know what the situation is with the villages below.

From Shishapangma, Heather Geluk reported she is OK and deciding on her next steps

Earlier reports said climbers seemed to be safe on Everest north side and in most higher camps on the south. The toll is reportedly rising in Everest south side basecamp and in Kathmandu. 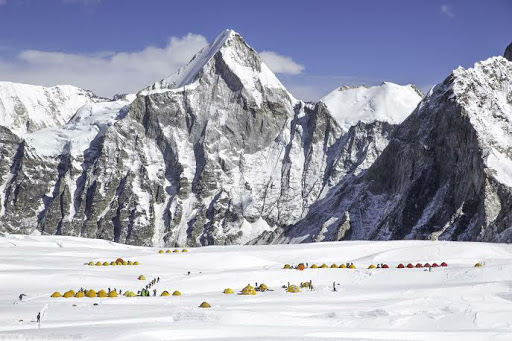 Everest south side camp 1 (Pumori in back) one day before the quake, which according to reports caused a huge block of ice to fall 800 m/2500 ft from the ice cliff in the saddle between Pumori and Lingtren.
courtesy Ryan Waters, SOURCE